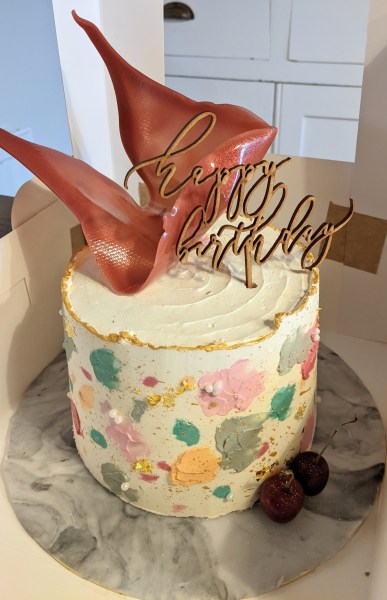 I’ve been looking back at the photos of my recent celebration cakes lately, and feeling genuinely astonished that it was Me who made them. I don’t mean to sound unbearably smug (although I feel a little pride is acceptable); more that, having experienced the actual process of making them, I can’t believe that that was the final result.

As an amateur baker (yes, I still feel amateur despite doing it for many years) there are constant challenges when baking cakes for other people. It’s not possible to learn every single thing you might need to do before you start, so you inevitably have to do quite a lot of learning on the job.

I remember the first couple of times I made layer cakes, getting to grips with the stacking, scraping and feeling very excited when I thought I’d finally cracked it. Then, on about my 4th cake, everything (and I mean everything) went wrong. The bake was dreadful, despite being a recipe I’d used many times before. The buttercream curdled. The filling oozed out so that my layers collapsed while I was crumb coating. I cried. I took it all apart and started again. It was, of course, fine in the end - but the stress I felt during the process was immense.

This pattern then repeated itself for every cake. Each time, something different went catastrophically wrong, resulting in tears, tantrums (things may have been thrown across the kitchen once or twice…) and a feeling of complete ineptitude. Surely, not all bakers have this every time they bake??

You’d think that with practice, the incidence of things going wrong would lessen - and it does, but of course with each one you’re usually also learning something new or trying a new technique, and there are pitfalls lying in wait to trap you again. Colours that seize your chocolate, drips that slop off unattractively instead of remaining artistically dripped, ruining the perfectly smooth, white sides you spent an age working on. Carefully crafted decorations that snap when you lift them from the mat (a personal favourite, looking at you Vulcan bomber). Then, just when you think you’ve cracked it, the season changes and you have a whole new host of temperature-based effects to deal with. Buttercream in summer is one tricky little tinker* I can tell you!! (*Not the word I used at the time).

As you can imagine, Mr Birdsong responded with trepidation when I announced I was going to add celebration cakes to my offerings. After all, he’s seen me in tears, hysterical, absolutely livid, covered in multicoloured buttercream and having to run to Sainsburys to get yet more ingredients on more than one occasion. Why would I do that to myself?? But then, when I look back at the photos and see how far I’ve come and what I’ve learned, I can’t help but feel immensely proud, and so glad that I did (and continue to do) the Scary Thing. Each new cake brings its own challenges and learning curves, and that’s what makes it such an incredible job. Just don’t ask me to make any more fondant planes please, thanks! 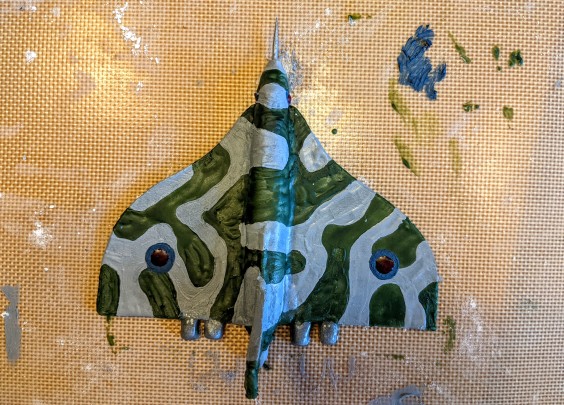